Tag - impacts of the second wave

Impacts of the Second Wave

admin2020-10-14T21:47:09+00:00
It has been just over 6 months since the first case of COVID19 was reported in Utah. Now that 2020 is almost over and we are dealing with the impacts of the Coronavirus, the question is what can we expect from the rest of 2020? It is predicted that a second wave of increased cases could bring about another tough hit to the economy. Many say the second wave is already affecting Utah, as daily reports of positive cases are increasing and many schools have switched back to online distanced learning after less than 2 months of being open. 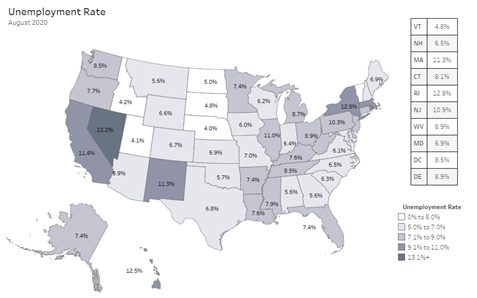 Unemployment skyrocketed in the United States at the beginning of the pandemic due to continued stay-at-home orders, business closures, health concerns, and reduced demand for products and services. As a whole the country’s unemployment rate has seen little signs of improvement, but when you look at state levels, Utah is doing extremely well. Utah currently has the second lowest unemployment rate in the country at 4.1% according to the U.S. Bureau of Labor Statistics. Utah’s rate is less than half of the national rate of 8.4%. This means many of those who were furloughed or laid off at the beginning of the pandemic are getting to return to work. The Salt Lake Chamber reports that weekly unemployment claims in Utah have steadily declined for the last 16 weeks. “Utah’s economy continues along its path of improvement,” reports Mark Knold, Chief Economist at the Department of Workforce Services. “The unemployment rate dropped in August and remains one of the nation’s lowest. It speaks to the energy and prospects within the Utah economy.” Utah’s economy has done a lot to recover, but it still has a long way to go. Travel and tourism, as well as restaurants took a hard hit in Utah and are not expected to recover for years to come. While some industries are struggling in the pandemic economy others, like the housing market, are doing quite well. When the pandemic first hit in April there was a big drop in real estate transactions, but the market has since recovered.

The graph below illustrates how the real estate market started out strong in early 2020, and then dropped dramatically at the beginning of March when the pandemic paused the economy. It also shows the strength of the recovery since the beginning of May. **Graph from realtor.com

The current market is an insane seller’s market. Historically low interest rates and a shortage of inventory has kept the housing market moving this year. There was an unusually high demand from buyers during the homebuying season. Buyers are wanting to move faster to beat out other buyers and lock in a low interest rate. There has even been an increase in new construction home sales. Utah’s construction industry increased by 7.4% and continues to be Utah’s fastest growing industry over the past 12 months, as reported by the Salt Lake Chamber. The housing market is thriving so far this year, but what could the second wave mean for the market? Well we can make a few predictions from what we know. The Federal Reserve has said interest rates are expected to stay low for the next few years. With low interest rates still fueling the purchasing fire, the demand for housing is expected to remain strong for the rest of 2020. Due to the extreme buyer competition and shortage of homes for sale, home prices have begun to rise and could continue to rise further. In August, the median home price in Utah was $362,000, which is $37,000 more than 2019. When a market has low inventory, people are willing to pay more for a home in order to beat out other buyers competing for the same home. Sellers are finding the ball in their court in this market, as they are able to price their home competitively to get the best price for their home. The high demand from buyers and low inventory is expected to continue so we can expect to see home prices move up. With the pandemic continuing to put many people out of work we can also expect to see an increase of homeowners that will default on their mortgages and be forced into foreclosure. Although foreclosures are not expected to reach anywhere near the level we saw in the 2008 Great Recession, we can still expect to see a few people affected. And let’s not forget we have the impending presidential election this November. We all know the political climate can greatly impact the housing market, so it will be interesting to see which direction the election goes and how that affects the housing market moving forward into 2021. If the coronavirus pandemic has taught us anything it is that life can change at any moment. Although we don’t know exactly what to expect from the rest of 2020 by understanding the current trends and economic climate, we can have a better prediction of what’s to come.
By adminUncategorizedcoronavirus, coronavirus second wave, impacts of the second wave, pandemic, Salt Lake Chamber, Utah Housing, utah housing market, utah unemployment0 Comments
Read more...